Feline Lang doesn’t do whole works of art. She is one herself. Feline grew up with classical musicians and entered the stage as a violin prodigy with 5 years. From her 16th on she worked on her personal form of musical theatre, as actress, dancer, director, and operatic singer. All at the same time. Worked on municipal stages, studied acting and classical singing, produced fringe shows. Fell for Tango Argentino and toured as a singer with the nationally and internationally most renowned German tango groups Tango Real, Puro Apronte und Yira Yira, arranged, recorded, and published full length “Tango, che!” (musicom). Founded just like that her own opera house canteatro, sang and directed Carmen, La Perichole, La Cenerentola, Don Quichotte, and more; arranged a Flamenco-Opera, a Salsa-Operetta, a Rock-Opera, a Multimedia Opera, invented the worldwide unique operatic theatre sport….

Opera and Tango troupe melted together in 2009 under the new name Feline&Strange. A theatrical construct from the very beginning, cooperating with the spirit of a Victorian globetrotter, Mrs Strange, manifesting in Feline’s body. But while writing the title song of 2nd full length SCIENCE FICTION Feline realized that everything made sense: She and her trusted had been sent to Earth into alien bodies on an unknown undercover mission.

For FELINE&STRANGE she does not only compose songs and lyrics, but also the look of the band, the stage shows, video clips, an dthe whole artwork. Of course also novel “A Space Opera” accompanying SCIENCE FICTION CD and graphic novel “GETTIN’ ANGRY” on TRUTHS have sprung from her mind and hands. 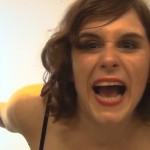 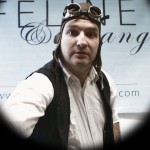 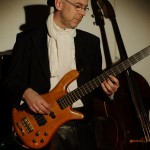 Drummers: Berlin: Agustín Strizzi, an Argentinian who plays anything that makes noise when hit, in any style, be it Tango, Jazz, or Techno. USA: Brian Viglione, worldwide known drummer of the Dresden Dolls and the Violent Femmes, Punk, show star, and a witty genius.

Feline&Strange released 3 full lenghts so far (BEHAVIOUR, office4music 2011, SCIENCE
FICTION, office4music 2013, LIES, motor entertainment 2015; TRUTHS will be out March 2016 on motor entertainment). The first tours led them through th republic’s best known jazz bars, as
Yorckschlößchen, Cotton Club, Badenscher Hof. With SCIENCE FICTION the band was discovered by the national and international Steampunk scene and played not only an the most important Steampunkfestivals in Germany, but became also resident artist at Berlin’s only Steampunk venue 12grad Aetherloge with a monthly show.

Feline is a fighter against unfair treatment of professional musicians. More about that on her initiative “music prohibited” and when roaming her and Christoph’s gigantic music production centre „musik erlaubt“ in Berlin.

The Alien Story and the Mission

Liked it? Want more? Take a second to support us on Patreon!

If you like what we do, please support us on Ko-fi. It takes a lot of coffee (and cookies) to create all this stuff!